It can be a major hassle to work with a group of people to complete a document or program, especially without the help of modern collaboration technology. You can try to email it back and forth among group members, share a computer, or even pass it around on a thumb drive. In recent years, companies like ThinkFree and Dropbox have made it easy to share a document online that will update whenever someone makes a change or uploads a new version, but this makes for slow progress and possible over-writing.

The most revolutionary software in this field of word processing was presented in the form of a website called Etherpad. It was the first website to provide users with a quick way of creating a public document that could be edited in real-time by a group of contributors. A year after its release, Etherpad was bought out by Google. Fortunately, Google then released the software as open source, effectively allowing anyone to host and modify the original Etherpad software. This has led to a great number of little Etherpad-based document editing services to pop up around the web.

Several companies have strived to make collaborating on a text document in real-time both convenient and useful. They provide their excellent online services free of charge, and are constantly improving and adding features. In this list, I present to you the greatest real-time document collaboration services from around the web. 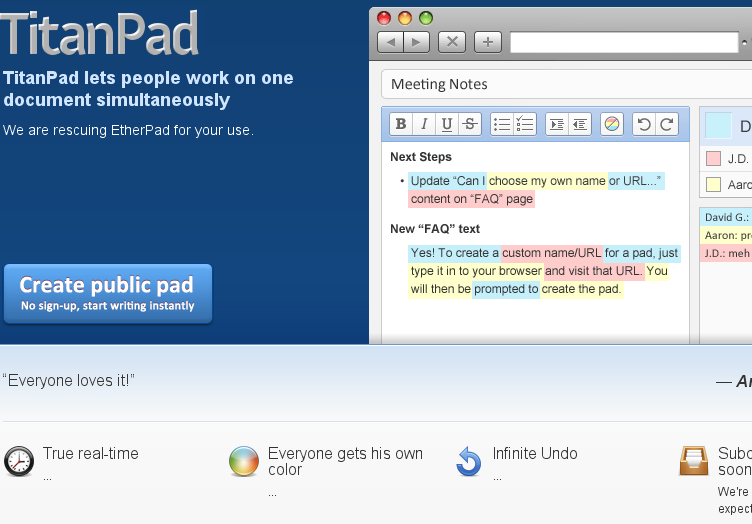 Sporting the older version of Etherpad, TitanPad provides a quick and dirty way to edit your documents online. You can either create a public document with a click of a button, or sign up for a free subdomain that will let you manage your documents. The first method will limit you to eight contributors at any time, and the second will allow you an unlimited number of contributors. As far as word processing features go, you can make bold, italicized, underlined, or crossed out text. Furthermore, bullet points and indentations can be placed anywhere in the document. Because it can be confusing keeping track of multiple edits, the contributions of different people can be color coded. For ease of communication among contributors, a basic chat box is provided with any document. If you make a mistake or would like to see past revisions of a document, there is an extremely useful “Time Slider” feature that lets you go back to a document as it was at any point in time. Documents can be imported to the pad in text, HTML, Word, or RTF formats. When you are done editing, the document can be exported as an HTML page, a plain text document, a Word file, a PDF, or an OpenDocument. 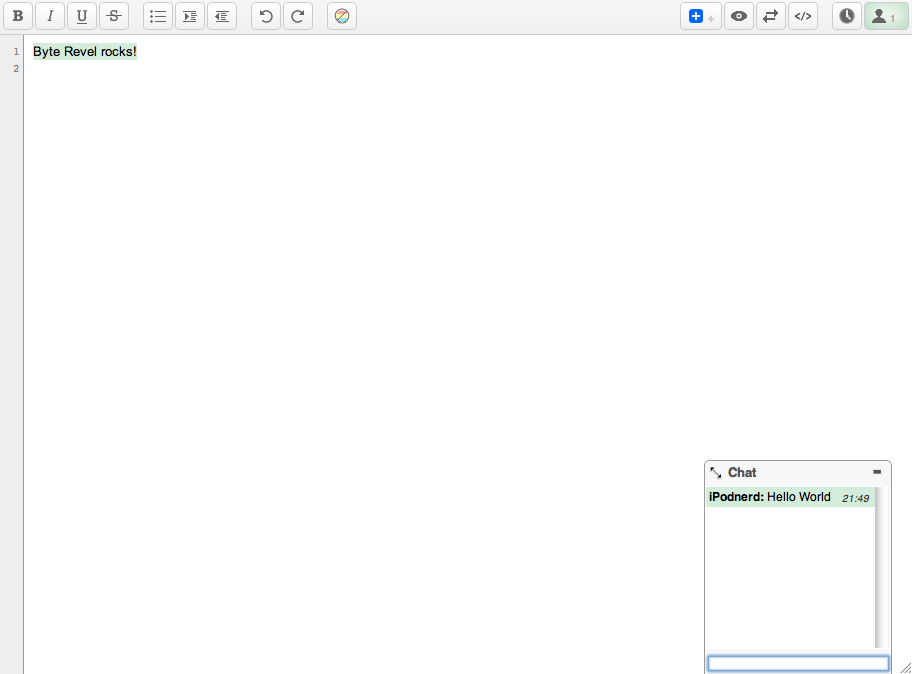 QikPad boasts the latest version of Etherpad, which was remade from the ground up since the previous version. It is both faster and cleaner. It has the same editing options as TitanPad, including text effects and a Timeslider. However, it lacks some of the impressive importing and exporting options that TitanPad supports. A tiny and extremely basic chat box can be opened from the bottom right corner, allowing for quick communication among contributors. There are also several sharing features, including embedding and a read-only document page. 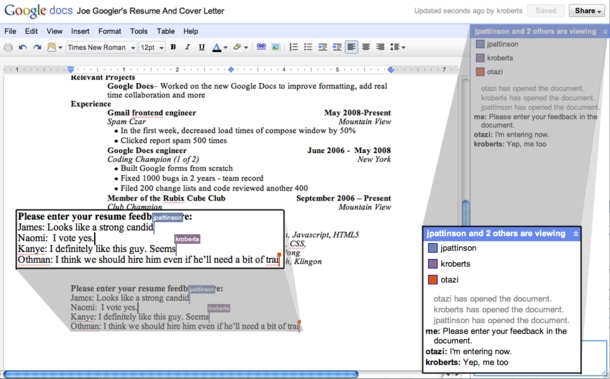 Anyone that uses Google on a daily basis (isn’t that all of us?) has heard of Google Docs. It’s known for being an easy way to store and publish files online. It’s also great for project management because entire folders of files can be shared with hundreds of people. While being able to share new versions of a document with group members is great, sometimes it’s not very efficient. A relatively new feature of Google Docs enables users to edit Google Documents in real time with other Google Docs users.

One of the most significant aspects of Google Docs is a sophisticated and highly developed editor. It provides almost anything you could ask for in an online word processor. With it, users can insert images, choose from over a dozen fonts, insert tables, and even make use of high level formatting.

Google Docs isn’t just limited to a text editor. It also consists of an entire online office application suite, including a spreadsheet editor, a presentation creator, and a drawing application.  It isn’t nearly as feature-rich as Microsoft Office, but it is probably more than sufficient for basic document editing needs.

Documents can be shared with up to 200 users, but can only be simultaneously edited by 50. That is a lot more than other services allow, so it is a good solution for large projects. When a document is being edited by more than one person, the names of the people editing it are shown at the top of the screen. Also, there is a collaborator chat window that all collaborators can see. Clicking on another collaborator’s name opens a private chat window. While using another service for communication isn’t much of a hassle, it is extremely convenient to be able to coordinate editing efforts with other collaborators in mere seconds. 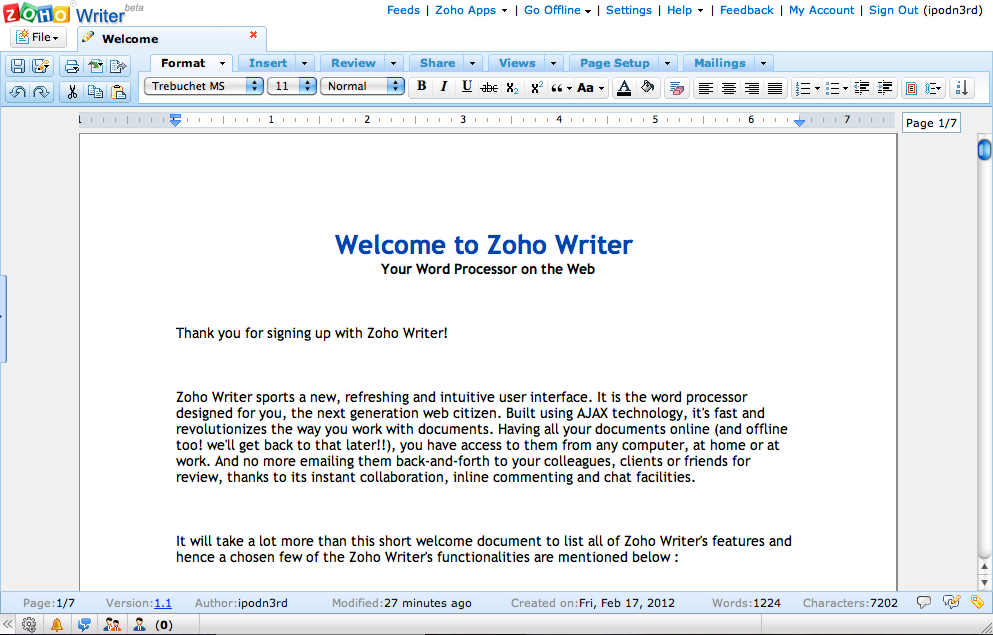 Similar to Google Docs, Zoho offers a comprehensive suite of collaboration and productivity web applications. Among over a dozen other applications is a highly functional word processor with a friendly interface. A step up from Google Docs, it lets users utilize advanced formatting and text styling tools. Plus, it has an entire application just for managing files made in the Zoho Writer. Several other Zoho applications, including a spreadsheet creator and a slideshow creator, can be directly integrated into documents.

Several years ago, Zoho announced its new real-time collaboration feature. Since then, any document that is shared among multiple people with read and write privileges can be edited by those people simultaneously. A unique aspect of this is that a document that is being collaborated on is broken up into “blocks” that can only be edited by one person at a time. Also, there is a basic commenting and chatting tool for communication between contributors.

Once a document has been completed, it can be exported in a variety of formats, including Word, PDF, and HTML. Alternatively, it can be posted directly to a blog or emailed to a group of individuals. 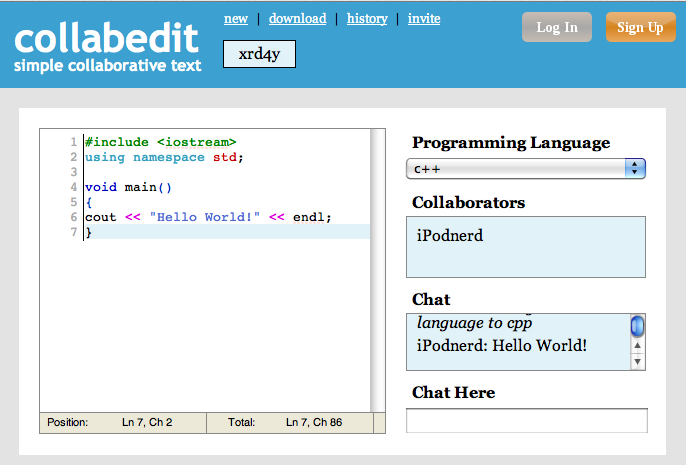 Collaborating on software development can be complicated, requiring such advanced version control systems as Git and SVN. Sometimes it would be extremely helpful to be able to edit the same program at the same time. Thanks to Collabedit, you can do so without leaving the comfort of syntax highlighting. Features include a simple text editor, a document history timeline, and syntax highlighting for over a dozen programming languages. Plus, collaborators can chat with each other while they work. Another use for this service would be as a teaching and learning tool. It makes it easier to teach someone a programming language over the internet (although you are probably better off using some screen sharing software).