We’ve all had one of those days where we really can’t be bothered dealing with mardy, spiteful, or generally negative messages. These days require full concentration and do not need someone dumping their emotional baggage on your doorstep.

Quite often, such days are derailed by a negative text message; something mean spirited, fun-sapping or just plain nasty. On days like these, a handy service that warns you about negative and horrible messages would be an absolute lifesaver, or would at least help you to delay the buzz kill long enough to get something done.

Well, that handy service is now available in the form of a free smartphone app for phones running Google’s Android OS. Developed by a Master’s student at the University of Portsmouth, the application is as smart as you would want, and your information is gathered from social media websites to predict the content of the incoming message.

Mohamed Gaber, a senior lecturer at the University, explained how the application could assist many in their day to day lives.

He outlined how, through analyzing the recent social media activity of the sender, the smart application could make intelligent predictions about whether or not the message would be positive, negative or neutral. This information is then transferred into a simple and user friendly color coding system, with green representing ‘positive’, red representing ‘negative’ and blue representing a neutral message.

The application also analyses the language used in the message and other factors which help it to decide on the level of stress it may cause you. If you feel that you are in a good frame of mind and ready to deal with anything that might be thrown your way; a red message need not be something to fear. If you’re in right in the middle of something that requires concentration, a red message might be best left until later, when you have more energy to devote to it.

On the flipside of this, a green message can supply you with the impetus and momentum to move forward on a particularly tough day. For Mr. Gaber, it’s all about managing your life and the information you receive.

“The ultimate objective of this application is to make the user aware of the negative content they receive so they are able to manage their stress in the best possible way,” he explained.

The application, “Stress @ Work”, was developed by Lorraine Chambers, who believes it could be potentially very useful, particularly for people with busy lives who feel that constant connectivity is not all it’s cracked up to be. Anything that gives us some degree of control over the input that floods into our lives on a daily basis can’t be bad.

As of yet, no test versions of the application have been released, so its efficacy is difficult to gauge. However, if it works as well as its developer and her lecturer predict, we could be seeing this smart little application appearing on thousands of Android smartphones in the very near future. 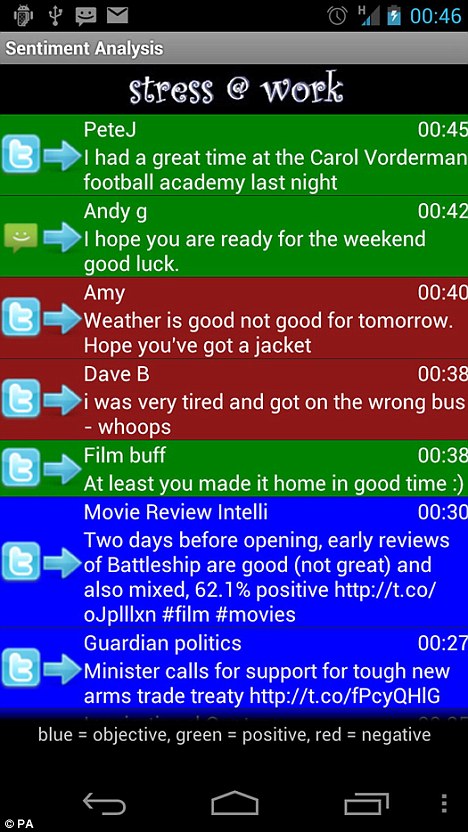