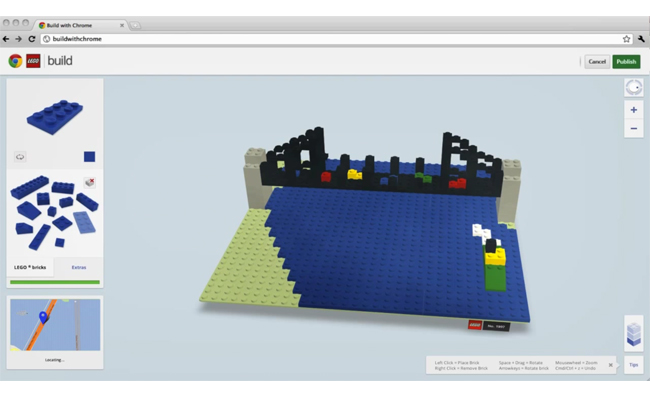 Working with LEGO, Google Australia has developed a project called “Build” that is an online 3D LEGO simulator. It consists of a detailed Google map of New Zealand and Australia that is broken up into small 32 by 32 squares of LEGO brick land. Each of these plots can be edited using the built in lego construction interface, and then they can be submitted for approval (most are accepted). Once a plot of land has been accepted, your creation will be visible to anyone that views the map and you can share the location of your creation via email or Google+.

So far, 12 kinds of LEGO blocks are available for use, and they each come in 10 different colors. Additionally, there are special door and window blocks for adding detail to buildings. That should give you enough to relive those childhood memories and show off your creativity to the world!

The Build map will only cover Australia and New Zealand for now, but there are plans to expand the map to include other countries in the near future. This will not prevent you from trying the web app from an unsupported country though.

The Google team explained the development processes in a blog post:

Build may look simple, but this collaborative 3D building experience would not have been possible a couple of years ago. It shows how far browser technology has come and how the web is an amazing platform for creativity. We made the bricks with WebGL, which enables powerful 3D graphics right in the browser and demonstrates the upper limit of current WebGL graphics performance. We then mixed in Google Maps (another Aussie invention) so you can put your creation in a LEGO world alongside everyone else’s.

Build makes use of the new WebGL technology that is currently only available in Chrome and the nightly builds of Firefox. If you haven’t already installed Chrome, I highly recommend that you give it a try. It will enhance your web browsing experience! Be sure to check out our list of recommended extensions. Likewise, Firefox is also a great browser. However, full WebGL support is not provided in the latest recommended release. Fortunately, you can grab a Firefox nightly build to get access to all the latest and greatest features, including an updated version of WebGL. While you’re at it, be sure to check out some other cool Chrome experiments.

If you have some time to kill, create something cool and drop the link to it in the comments! We can’t wait to see what you come up with.