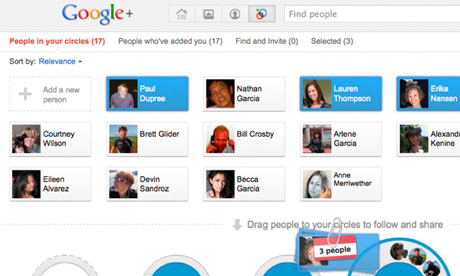 A user dragging contacts into Circles

In a blog post published on the official Google blog today, Google announced a new service called the Google+ project. Google+ is Google’s all-out attempt at a social network that will compete with Facebook. The social network is currently in a “field trial” and is only available to a small number of people, but you can hope to get access in the near future (you can sign up to get notified as soon as it gets out at https://services.google.com/fb/forms/googleplus/).

The many features of Google+ include Circles, hangouts, sparks, profiles, streams, and a great mobile experience (fittingly dubbed “Google+ Mobile”). You’re probably wondering what a lot of the previously mentioned are, so read on.

Right off the bat, we’re talking about copying Facebook. Streams, or “Walls” if you prefer, are where you can post activity updates, share web content, +1 things (If you aren’t already familiar with +1 buttons, they are essentially a Facebook “Like”), exchange comments, make announcements, et cetera. I reiterate, these streams are very similar to the “walls” you are familiar with on Facebook. Almost anything you can do on a Facebook wall, you can do on a Google+ stream. Plus, there are some features that are unique to Google+’s stream such as versions of the stream based on groups of people.

Simply choose a topic that you are interested in, and “follow” it. Sparks will aggregate information from around the web into one page. For example, I could search for or follow “technology” and be provided with links, videos, and other media and information regarding technology. According to various people who have tried out this feature, the results could use a little work. To summarize, the goal of sparks is to give you information that will help you “spark” a conversation with a friend.

Video chat just got a little cooler with hangouts. Similar to a group video conference you might have in Skype or ooVoo, hangouts allow you to have clean and simple group video chats with friends and enemies alike. You can either start your own hangout with a group of friends in one of your circles with the click of a button, or you can join a hangout that your friends have already started.

Circles and hangouts are two key features that help make Google+ more preferable than Facebook. Circles are Google’s take on groups. With circles, you can organize your contacts into the default groups (acquaintances, following, family, and friends) or into your own custom group (think geeks, school, work, et cetera). Each of these groups has its own As hinted at above, this is a major improvement on Facebook’s group system. With Facebook, there is just friends and, well, not friends. In addition to being able to sort your contacts into groups, each group gets a stream page in which you can share media, announce a hangout, organize an event, or anything else you would do with a stream or Facebook wall.

Currently available through the Google+ app for Android (must have Android version 1.8 or newer) and soon to be available through an iOS app (there is a nice mobile web app as of now), Google+ mobile sports a clean interface with almost all the functionality the web version plus some more unique features. One of these unique features is Photos. With Photos, each and every photo you take on your device will be automatically uploaded to a photo archive on Google+. Like Facebook, these uploads are unlimited. Unlike Facebook, Google doesn’t limit the number of photos per album or the photo size. The same goes for video uploads. Although videos are restricted to 15 minutes in length, they can have a resolution of up to 1080p (Facebook limits users to 720p). Another feature unique to mobile users of Google+ is Huddle. Huddle lets users participate in a group chat with friends in from a certain circle.

Last year, Google launched its first attempt at social network. It was called Google Buzz. Buzz was underwhelming, and it looked like Google was out of the game. It appears that Google gained valuable experience since then and Google+ looks very promising. Although somewhat geekier than Facebook, it has many features that are unique to it that would interest many people.

Check out the official Google+ page at http://plus.google.com.