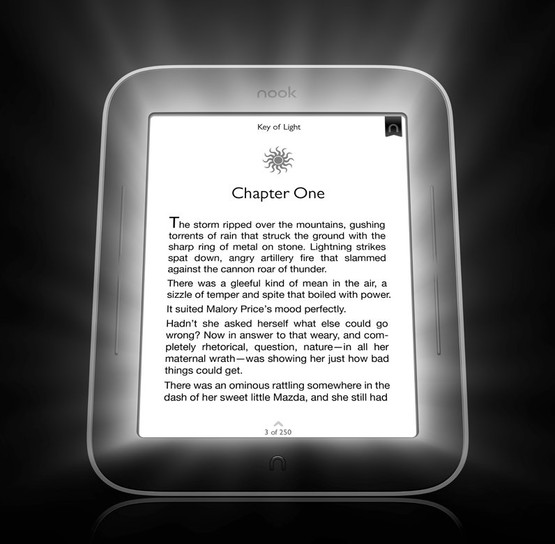 Like super heroes, all E-readers have an annoying weakness. For the iPad, it’s the intense glare that makes it hopeless to read under the wrath of sunlight. For the Nook and the Kindle, it’s the darkness that makes text illegible. B&N engineers have found a solution to this problem for Nooks, and it comes in the form of a front-lit screen.

The B&N Nook Simple Touch With GlowLight is the same as any other model of Nook, but when the “N” button it pressed, GlowLight is activated and the screen is lit up. As would be expected, there is a simple brightness setting that allows you to set the lighting to anywhere from a dim glow to a bright white. If the light is used frequently, B&N claims that the Nook can last up to a month on a single charge (two months without the GlowLight).

The few people lucky enough to test the device have said that it emits an even and pleasant glow that is easy on the eyes. B&N is using this as a selling point, explaining that it’s “perfect for bedtime reading” because it doesn’t keep your partner awake and it makes reading in the dark enjoyable.

Understandably, this model is more costly than previous Nooks, and will set you back $139. That’s 40 bucks more than the $99 kindle Touch WiFi e-reader, and less than the 3G kindle Touch. You can pre-order today, but they won’t be shipped out until May. You should be able to get it in  stores by April.

It is rumored that Amazon is working on adding a similar feature to its line of Kindles, but B&N beat them to the punch. B&N hasn’t been doing very well over the past year, and the Nook GlowLight might just give them the boost they need.