Wow. Physics games happen to be the best selling throughout the iPhone App store. Well, they do have pigs getting splattered or feeding chubby little monsters with candy gumballs, I mean who doesn’t see the appeal. But it could be a bit difficult to find good puzzle games through all the look-alikes, or you might want to learn more about them. Here are the top 10 best selling iPhone Physics Puzzle games as well as some very interesting physics games. 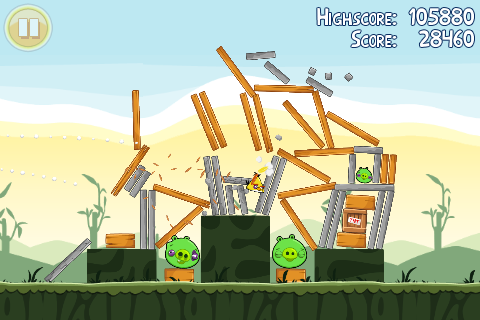 This little app is all about feeding a gumball to a little monster. I guess it combined the simplistic element of Angry Birds with the a different physics strategy. Most have heard about it, for it was the first app to oust Angry Birds from its throne at the top of the iPhone Apps development list.

A personal favorite. Peggle is an interesting game, that involves unicorns, rainbows, and happy music that would serve as the theme for Pretty Princess II – The Return of the Prettier Princess. Most manly guys wouldn’t be caught dead playing a unicorn game. But the explosions, cool gizmos on the sides of the playing course that don’t do anything, and other animals that tell you what to do just make the game so appealing. You should definitely try this one out. 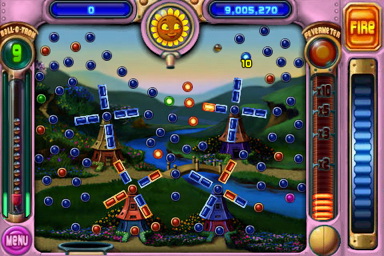 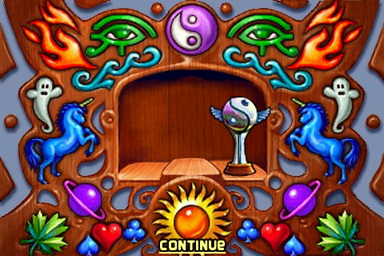 Labyrinth has always been a popular board game. But now it has lasers, wheels, holes that do stuff, and many more gadgets that make the game more entertaining. Along with Peggle, I rank this is a must have.

A game where you have monkeys that cross a certain area by constructing a bridge. The challenge? You have a limited supply of bamboo sticks and the monkeys have a tendency to destroy whatever you build. It is quite interesting, but after sometime, can become quite annoying.

People love this game. I find it semi-amusing. It is interesting, and a very good physics puzzler. You have little Mokis and all you do with them is launch into swirling vortexes with a bomb. 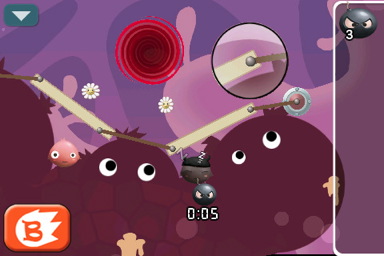 Topple and Topple 2 are probably the simplest of games on this list. The entire point of the game is to stack up blocks as high as you can. Saying that, you should check out the free version. Not everyone loves it, but you try it. If you find the free version amusing, there is no need for the paid version (not much of a difference).

Not for everyone, and I do find it bit overrated. But it isn’t in the 8th place because it is bad. It is in the 8th place because it joined in the 8-way tie for 8th. With that being said, Enigmo is one of the most downloaded games of all time. It has very interesting gameplay; guide droplets of water, oil, and fire into different, specified pots. There are plenty of different tools you can use to manipulate the water/oil/fire, and this make the gameplay more diverse. 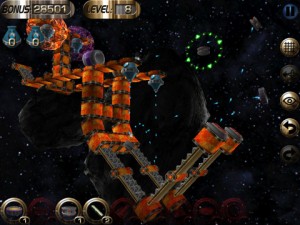 This games follow a similar theme. Using parts to make something happen. In Toy Physics, you guide toys using several different aspects of physics (hydraulics, pulleys, ropes…) into the moving crates. Finger Physics, downloaded over 5 million times, requires the moving of shapes, and is two-dimensional. Crayon Physics is my favorite of the three, and uses a two-dimensional plane of crayon drawing to make a certain scenario complete.

Hudson can have an entire category of Physics gaming to themselves, but Aqua Forest is one of the most prolific. The point of the game is to calm oneself as they move water from a Point A to a Point B. It is a bit difficult to classify, so I encourage one to check out this one, especially if they are a bit tense.

So as I conclude the top 10 list, I must say that these apps, are not in order of best to worst, nor worst to best. It is judged by its versatility, enjoyability, less stress inducing, calming, and a plethora of other complicated matters. With that being said, I am open to any suggestions, and maybe I might talk about other Physics puzzles. I hope you enjoyed the article!