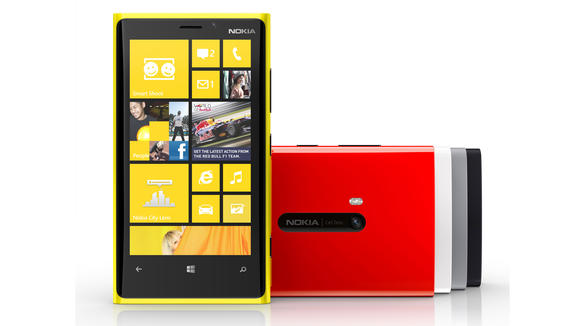 Nokia unveiled the gorgeous new Lumia 920 on the 5th of this month, and there’s no denying that it’s impressive. Compared to its predecessor, the new Lumia has a higher quality display, a better camera, and a faster processor. Plus, the Lumia has built-in wireless charging support. The camera makes use of PureView algorithms and a special suspended lens to stabilize images and videos, but it was falsely advertised in one of their commercials.

While the body design is identical to that of the Lumia 900, it is available in three new colors: Sunshine Yellow, Lipstick Red, and Slate Grey. The screen is a different story. The Lumia 920 ‘s 4.5 inch Nokia PureMotion HD Plus display sports a resolution greater than that of standard HD screens. In pixels, it’s screen is 1,280×768, and standard HD is 1280×720. If you do the calculations, it’s tied with the 326 PPI of the iPhone’s retina display.

The camera is a satisfactory 8-megapixels, and it has a “floating lens” that helps hold the image steady. Most significantly, however, is the PureView software processing that all images and videos go through. It increases image stabilization up to 50% more than high-end digital cameras. Nokia even released a commercial showing off their PureView technology, but all of the footage was faked. In the ad, the Lumia video is supposedly shot by a man riding a bicycle, but it was actually recorded by a fancy video camera mounted in a van. See below:

After news of this broke out, Nokia admitted their mistake and released a real side-by-side video comparison of footage shot with and without PureView. It’s still quite good:

The Lumia 920 will sport a dual-core Qualcomm Snapdragon S4 processor. This is the same processor that phones like the HTC One X and the Samsung Galaxy S3 use. Users can expect extremely fast responsiveness.