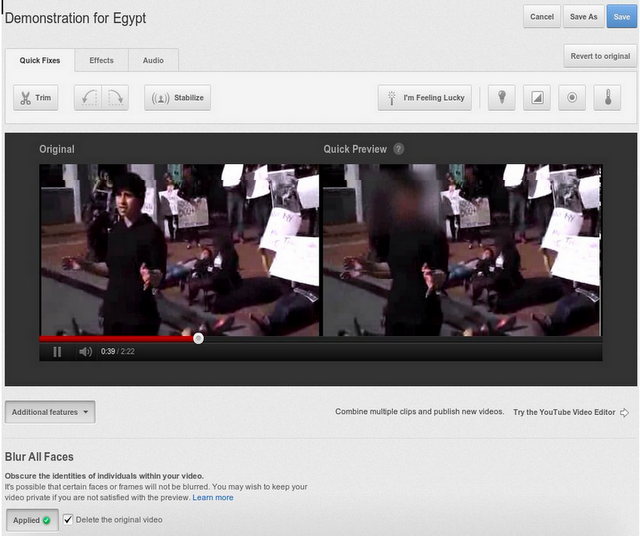 YouTube has updated their online video editing software to allow users to automatically blur out the faces of people in their videos. The idea behind this feature is to provide privacy and anonymity to activists, minors, and those not wishing to disclose their identity in publicly available videos.

This blurring capability was first announced in an article on the official YouTube blog, in which Amanda Conway, a YouTube policy associate, described how “citizens continue to play a critical role in supplying news and human rights footage from around the world.” Being the most popular video sharing platform on the internet, it is important for YouTube to provide tools supporting the efforts of such people.

As is to be expected, the blurring accuracy isn’t exactly great. It only works for very visible and direct face recordings. If the subjects of a video are somewhat far away or are not facing the camera, YouTube’s facial recognition fails, and their faces are not blurred. Thankfully, most quality video editors sport some sort of censoring or blurring tool, so if YouTube’s blurring feature isn’t adequate, you can always apply it by hand.

One of the concerns voiced by people is that governments might be able to force YouTube to hand over the unedited versions of certain videos. If, for example, there is a group of extreme activists that commit a crime, and a censored video is posted of said activists, the government may be able to find out the identities of the activists and fine or jail them. However, it is important to remember that this is merely the first release of an exorbitantly complicated technology. It should be treated as such, and any videos of importance should be edited manually. It is also important to keep in mind that faces aren’t the only way to identify an individual. License plates, background scenery, and voices also provide significant clues.

For now, this feature is best used to provide simple privacy to children in family videos or private speakers from anonymous conferences.

On a related note, Google already blurs faces and license plates on Google Maps and Google Earth using automated software. I would not be surprised if license plate blurring functionality were added to the YouTube video editor in the foreseeable future.

If you have a YouTube account and you are interested in utilizing this tool, you’ll be glad to hear that it’s a quick and easy process. Simply navigate to your Video Manager, select the video that you would like to edit, click the edit button for that video, and click the enhancements tab. Clicking on the Additional features button on that page, pictured above, will reveal the option to blur the faces of people in the video. Be sure to watch the preview to see if it did a satisfactory job.

YouTube believes that the feature “allows people to share personal footage more widely and to speak out when they otherwise may not.” Hopefully this new technology will encourage users to post more entertaining, newsworthy, and controversial videos.