Now that you’ve got the basics for the Lego Mindstorms, we can start programming. To start, open up RobotC and open a new file. Outputting text is the first thing you will do with almost any programming language, so let’s start with a program that displays “Hello World” on the screen. Note that this program will not be very useful in actual programming, but I’m doing this to demonstrate that RobotC can display “Hello World”.

This is what it will look like. Don’t worry about the commands, for they are not used much in RobotC. 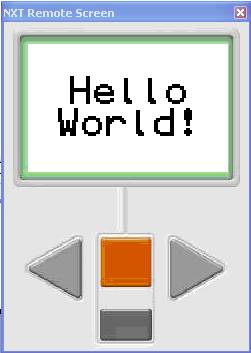 Now that we have that out of the way, we can start with the actual programming. Let’s start with a basic program that tells you robot to move forward and backward.

This program makes the robot move forward at 50% power for 1 second,and then move backwards at 40% power for 2 seconds. For the power, I would advise that you dont run the power at 100 because the robot has a PID control that speeds up or slows down to get the desired speed. having the motor at 100 power will not allow the PID control to speed up the motor to get the desired speed. No need to understand that now, I will explain it more in a different tutorial.

There are two simple ways to turn your robot. There are other ways, but that’ll come later. This is another simple program demonstrating them.