The folks over at Dentsu London and BERG worked together to make this extremely impressive stop-motion film. The film was the second project in Dentsu’s “Making Future Magic” series in which they wanted to be “exploratory with media, wonder what magical visions of the future might look like, and try and create communications of cultural value”.

This is obviously not your average stop-motion animation. It is made up of floating light animations and words. This isn’t all that impressive on its own, as you can make such animations and graphics in Photoshop and After Effects. Their strategy of animation and painting was very creative and unique.

They made long exposure recordings of an iPad moving through space as it displayed layers of a 3D model.

The process starts by making 3D models in modeling and animation software. Then, cross sections of the models are taken and organized into a video. The video is played back on an iPad (or iPads) while people move them smoothly through the air. Meanwhile, A camera is set to take a long exposure (3-6 second) photograph of the moving iPads. 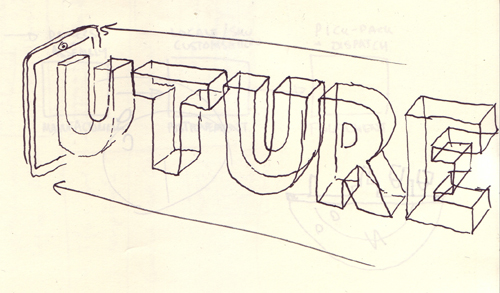 If you are interested in making light paintings of your own, you can buy an app made by Dentsu called “Penki” (Japanese for “paint”). It only costs 99 cents, but you will need a camera that has an exposure length setting.