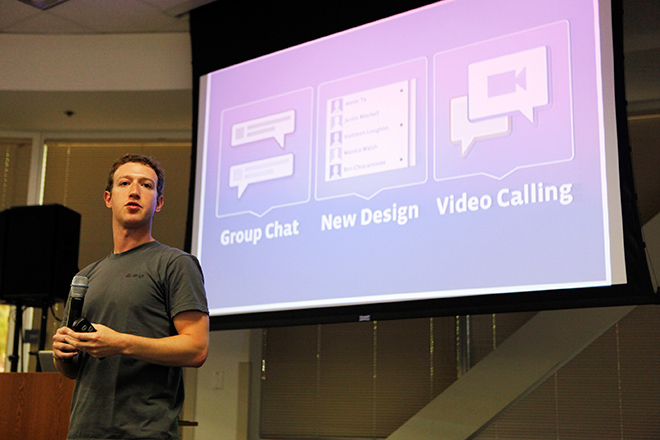 Yesterday, Mark Zuckerberg  invited media reporters to the Facebook headquarters in Palo Alto. The reason, he said, was for an awesome product launch. During his 45 minute presentation, he announced a new chat design, group chat, and, most significantly, Facebook video chat (made possible with Skype).

That’s right, Facebook is buddying up with Skype to provide users with one-on-one video calling. Video chat services like Skype, ooVoo, and Gmail video chat have been around for a long time. In that sense, this announcement is insignificant. However, many people already use Facebook, making the need to sign up for a new account on another service unnecessary. Also, many users of Facebook aren’t very tech-savvy and setting up an application like Skype might bewilder them. Facebook video chat would make it possible for people like that to have access to the fun and useful technology that is video chat.

It is interesting that this update comes very soon after Google announced Google+. Google+ boasts both group video chat and one-on-one video chat. Perhaps this announcement is Facebook’s response to the features that Google+ has that Facebook lacked. In addition, Google+ already has group chat and group chat comes as part of Zuckerberg’s announcement. Is this announcement a coincidence? I think not.

What is your take on the new video chat on the mighty Facebook? Do you love it? Hate it? Really don’t care? Comment!