Apple does a clean job of portraying iOS development as a fun, streamlined, and straightforward process. While this may be the case for experienced programmers and developers, the opposite seems to be the pervading opinion about iOS development for beginners. Five or so years back, when I was overly zealous and dangerously naïve about the development process, I considered Apple’s SDK to be the coolest idea ever. But, as I engaged in trying to figure out the code (as well as learn Objective-C simultaneously), I became increasingly frustrated with the set-up. Not to mention that my entry into application development was through self-teaching Objective-C. Altogether,  with my lack of programming experience and my enchantment with Apple’s iOS SDK, this made for a somewhat disappointing and frustrating experience. As a result, I switched to learning Java for application development. 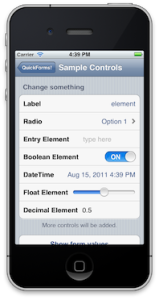 A variety of QuickDialog’s Features 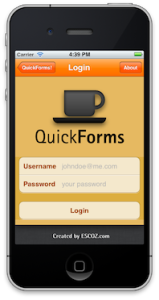 Quickdialog’s Forms are an easier version of Apple’s UI

For developers beginning the iOS development process, it can be difficult to get a mix of programming in with an organized setup. What I mean is that learning iOS development can be a somewhat discouraging process (as I described in my personal experience). Xcode is not the easiest IDE to use. Objective-C is a weird mix of Java-like syntax with C coding and Apple’s UI features. On top of that, there are a myriad services that replace actual development with templates or dragging and dropping UI onto a screen and calling that an app. With such a striking dichotomy of services, the beginner programmer is torn between creativity and simplicity, between learning and ability. This makes learning application development, especially for someone with little or no programming experience, an overwhelming and slightly discouraging endeavor.

With my personal ramble aside, let’s talk about a neat little technology called QuickDialog. QuickDialog is a package released by ESCOZ Inc that allows iOS developers to easily use UI elements in their code. The package comes with an assortment of elements that are free to use in an iOS application. Ranging from buttons and sliders to scrolling UI and switches, QuickDialog is an easy to use, opensource package that any beginning developer should check out. You can visit ESCOZ Inc’s web page on QuickDialog here.