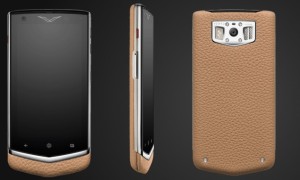 The tan edition of the phone

The Constellation is the newest phone released by the England cell phone company Vertu. While most commercial smartphones vary in price between a few hundred to almost a thousand dollars, the Vertu Constellation costs around $5,700. At about 6x the industry average for a device that is always growing in ubiquity, what does sinking ten grand into a cell phone get you?

The Vertu Constellation, like all of Vertu’s phones, is a handmade device made out of luxury materials. For example, the backing of the phone is not a case; it is a leather backing instead of the standard aluminum or plastic covering. The company claims that a single craftsman, using the finest leather in England, assembles the device (and eventually signs his or her name into the phone). Following the leather, on the side of the phone, there is a ruby button, used for special services (see below). Additionally, the phone’s skeleton is crafted out of a titanium alloy, and the phone’s surface sports a sapphire crystal screen. 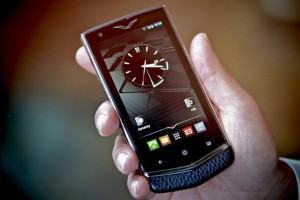 Hardware for the Vertu Constellation sports some interesting features. Other than the luxurious materials invested into crafting the device, it boasts noise cancelling technology for the user. In addition, the screen has been polarized to minimize reflections and glare. It boasts a front (1.3 MP) and rear facing (13 MP) camera as well as top-notch sound features. The Vertu Constellation boasts Android software specifically designed for the phone itself. It has a battery with a standby life of 405 hours and an Internet use time of 7 hours. It has 32 gb of Internal memory as well as a 1.7 gHZ Snapdragon Processor.

The operating system is similar to many Android builds (it runs Jellybean), except for the two distinctive features that separate the device apart from any other commercial smartphone (and perhaps justifies 75% or more of the cost): Vertu Life and Vertu Certainty. 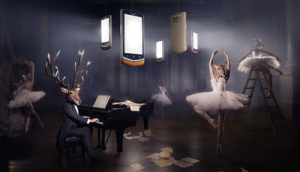 Vertu offers two services that last for the duration of the phone’s ownership: Vertu Life and Vertu Certainty. Vertu Life basically turns your phone into a club pass into pretty much every premier club, sporting event, and cultural events. The phone works as a pass into events such as Wimbledon, Formula 1, or even Cannes Film Festival. This service exudes an arrogant aura of aristocracy, as a select group of wealthy phone owners gain priority access into some of the present-day’s most important world events. Nonetheless, owners of the phone paid for this type of service.

Vertu Certainty is another feature that has more practical uses. Certainty offers a variety of security and protection services to the phone’s owner. These services include, a partnership with a corporate asset management company, personal global tracking, and a gold standard insurance policy (for ransom, kidnappings, etc… You can probably guess what kind of people own this phone). In addition, owners of the phone get global Wi-Fi access, Encrypted Phone data, 24/7 Live Support, and Anti-Virus/Anti-Theft protection. This phone offers a myriad different protective services that apply anywhere throughout the world. This was achieved by Vertu’s various partnerships with global companies in data encryption, Wi-Fi access, etc…

One feature that wasn’t included in the Constellation but is almost a landmark piece of software in Vertu technology is the Concierge service. The Concierge service is a Vertu call center that is available 24/7 for communication. They help Vertu clients find hotel rooms, inform users about cultural norms, and even make online purchases. The Vertu Concierge helps phone owners get into exclusive events as well as get out of a possible political situation. This feature is included in the Constellation’s older brother, the Vertu TI (~$10,000 phone).

The Constellation is an expensive piece of technology. But, it has its speciality uses and seems to be worth the cost, especially for business executives, politicians, and other frequent ransom targets. A personal opinion on the Vertu phones: the Constellation is perhaps the first Vertu phone that doesn’t look dog ugly. For paying several thousand dollars, I’d expect a client would like his or her phone to be aesthetically appealing. If you are interested in looking at some of Vertu’s other phones, check them out here.