Apple held its “Let’s Talk iPhone” event this Tuesday at its headquarters in Cupertino. As was expected, the keynote was presented by Apple’s new CEO, Tim Cook. Steve Jobs resigned rather recently, making this the first Apple keynote presentation at which Cook presided. Jobs was nowhere to be seen during the event, but, as we found out on Wednesday, there was a good reason for that.

The entire presentation was about an hour and a half, and you can view the official recording below this paragraph. If you’re like most people, you probably don’t have the better part of two hours to just sit around and watch a keynote presentation. You need not worry, though, for in this post I intend to present and analyze most of the information revealed during the keynote.

Cook starts off talking about the rapid growth of Apple and that two new stores opened in China last weekend. He goes on to explain the impressive popularity of their stores, and even plays a video of the launch day of one. This brings the total number of Apple stores to 357 (in 11 countries).

He continues with tails of triumph regarding Mac OS X Lion and the astoundingly light Macbook Air. Apparently, customers are just gobbling up these new Apple products and the Apple market share is now 23 percent.

After providing a quick summary of music history and the iPod, he points out how music is a major part of our lives nowadays because devices like the iPod make it convenient to listen to music anywhere at anytime. Cook also shared out some unsurprising statistics:

Of course, he couldn’t mention the iPod without bragging about iTunes. The number of song on iTunes is now 100 times what it was at launch. Plus, 16 billion songs have been downloaded to date. As I’m sure we all could have guessed, this makes iTunes the number one music store in the world (it’s kind of odd to give a virtual store that kind of title).

Tim Cook finally started talking about iPhones, but it was only a teaser. He stated some obvious facts, like it being the number 1 smart phone in the world, and some less obvious facts, like it being number one in mobile phone customer satisfaction. However, it only has a 5 percent market share in the worldwide mobile phone market. Oh, and “More coming up and iPhone.”

On to the iPad. People are thoroughly enjoying the iPad line, both the first and second generation. The customer satisfaction rating is above 95 percent, and iPads are making their way into schools across the country. Cook clearly believes that the iPad has the potential to change the way children learn in schools. Impressively, every state in the United States has a pilot program going on in which thousands of schools provide iPads to students to supplement their learning material and activities. Cook described how iPads are making their way to cockpits, hospitals, and similar working environments. While he says that this makes jobs more efficient and safe, I can imagine many situations in which it could be hazardous. Old paper and pencil organization, storage, and referencing is extremely reliable, while advanced technology can easily break or run out of power.

The iPad is dominating the tablet market, at 74 percent market share.

While on the subject of iOS, a new Apple app for iOS was announced. The new app is Cards, and it allows you to easily make cards. There are 21 different card designs in six different categories. Once you are done creating your card, Apple will print and mail it for you for a fair $2.99 (to anywhere in the U.S.) or $4.99 (to anywhere outside of the U.S.). Once iOS 5 is released, Cards users will receive a push notification when their card is delivered.

iCloud was also re-explained. With iCloud, the music that you purchase will appear automatically on all of your devices. You will also be able to download past iTunes and App Store purchases. 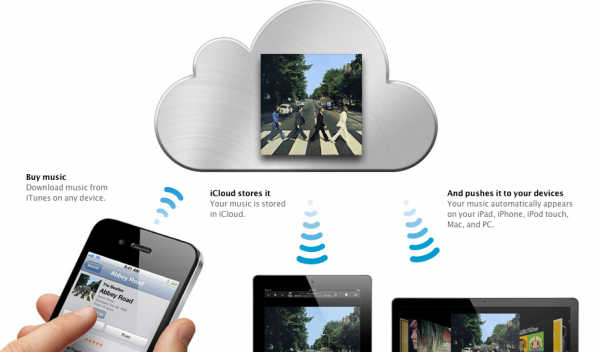 In addition, media (books, photos, videos, et cetera) and iWork projects not purchased from iTunes or the App Store will also be automatically synced between all of your devices. Many people have large music libraries, and uploading them to iCloud isn’t practical. Apple has a solution for this. When you “upload” songs to iCloud, iTunes will actually be matching your songs to songs in Apple’s massive music library. Like uploading, downloading can take a long time. Plus, large music libraries can take up a lot of space on mobile devices. In the iTunes settings of iOS devices, “iTunes Match” can be turned on and your entire music library can be streamed to your device.

Another cool iCloud feature is Backup. iCloud will backup all of your iDevice data daily. As a bonus, you can easily apply backups to new devices.

Find my iPhone has been around for a while. With it, users can see the locations of all of their iDevices on a map. Some new features were announced, though. Macs will soon be compatible with Find my iPhone, and there will be a new iOS app for accessing the Find my iPhone data of friends and family. This new app, Find My Friends, will show a list of all of your family and friends and where they currently are located. Of course, users will have to opt-in to share their location. You can also look at a large map that will show the exact locations of all of your friends. I find it difficult to imagine that your friends would want you stalking their location 24/7, and it seems like the Find My Friends devlopers thought similarly. You can create Find My Friends events that will limit the period of time during which event members will be able to see each other’s location.

Apple has created this video to summarize the features that iCloud will bring:

As was expected, some minor updates to the line of iPods were made. The iPad Nano now has a better navigations system. Mimicking the page interface of iOS devices, you will be able to scroll through your basic iPod Nano applications. Additionally, the Fitness app has been improved. Users can now go on a walk or run with their iPod Nano and then connect their iPod to their computer to upload their run information to the Nike Plus website. Apple noticed that people were using iPod Nanos as watches, so they improved the app accordingly. There are 16 new clock faces, including a retro and Mickey Mouse styles.

iPod Touches were left relatively untouched, with the only update being that they are now available in white.

Siri will do an excellent job of recognizing commands in no particular format. It can perform a wide range of tasks, like sending a text message or getting directions. The new features can best be described through this video:

It really is rather incredible. Android phones have had voice recognition capability for some time, but it was certainly not as good as Siri.

Overall, the iPhone 4S was a good improvement on the iPhone. There is no reason to be frustrated that the iPhone 5 wasn’t announced- Apple could easily have called this phone the iPhone 5.

Here is the official Apple video demonstrating the iPhone 4S: