AI, or artificial intelligence, has been around for quite a while now. It forms a complicated branch of computer science in which computers are programmed to emulate the intellectual abilities of humans. Commonly used in computer games, it brings a new level of interaction between humans and glaring machines.

The most complicated form of artificial intelligence is sensical speech. For many years, AI programmers have been working hard to develop the conversational abilities of computers to the point that conversation with them is indistinguishable from that with a real human. The primitive versions of these “chatbots” were capable of extremely basic text-based conversations with an intelligence just below that of a confused pre-schooler. Now, chatbot technology has advanced to the point where humans can have endless, sensical conversations with computers. However, we’re still not quite to the point where computers could be mistaken for humans.

The smarter chatbots collect and analyze data from their conversations, effectively becoming more intelligent and conversationally capable all the time. One such piece of advanced chatbot software is Cleverbot. Programmed by AI expert Rollo Carpenter, Cleverbot has had (and continues to have) millions of conversations with humans over the internet. It learns from its conversations, and consequently becomes smarter every day. After showing off its capabilities, Cleverbot won the 2010 British Computer Society Machine Intelligence Competition.

Their first conversation commenced with a greeting. They quickly become angry with each other and, after some smart-alecky lines, start saying nonsense. You can watch the full conversation below: 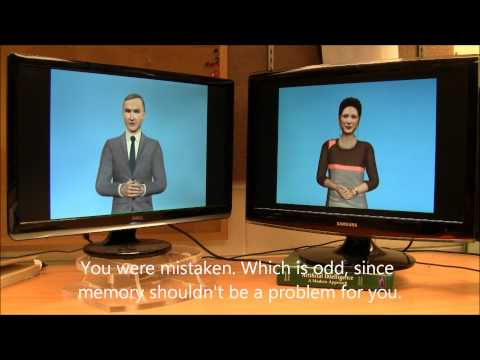 Even though the conversation was a bit absurd, it made sense for the most part. I dare say it was even entertaining.

This shows one of the things AI is capable of without human interaction. I can see this going even further when AI advances to the point where two chatbots could have meaningful conversation about topics relevant to society. Imagine two chatbots debating over resource consumption, presidential candidates, or even the meaning of life. Or, on the entertainment side, there could be a reality show generated by a couple of chatbots.  AI has the potential to revolutionize the way computers are used in society, whether that be for the better or for the worse.