The binary numeral system is a numbering system that uses the digits 1 and 0. It is also referred to as the “base two numbering system” due to the fact that two different numbers are used. Contrary to popular belief, the system is rather easy to learn. 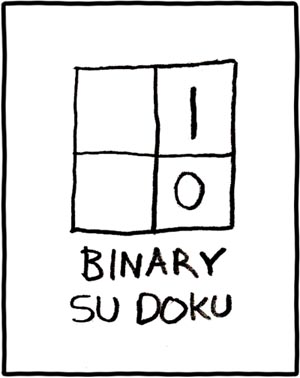 You are most familiar with the base 10 numbering system, also known as the decimal system, in which 10 different numbers are used and their position describes what power of ten  they are to be multiplied by. These 10 digits are combined to form any number, and the numbers formed can be used in mathematical problems.

Similarly, in the binary numeral system the numbers 1 and 0 are combined to form any number. The positions of the 1’s and 0’s describes whether or not certain values of the power of two are on. The values of the powers of two that are on are added together, resulting in the base 10 equivalent. Because of the on-off nature of the binary numeral system, it is heavily used in technology. Circuits can be in one of two states: on or off (think light switch). Computer storage processes are made up of large sequences of these states, and they are interpreted as binary. The number 1 is the on state, and 0 the off state.

Each digit of a binary number represents a power of two. These powers of two can be seen in the following table (“^” means the following number is an exponent):

Those are essentially the values that are represented by the 1’s and 0’s in an 8-bit binary number. Now it’s time to look at a binary number.

In common usage, the zeroes that are to the right of the right-most 1 are left out. 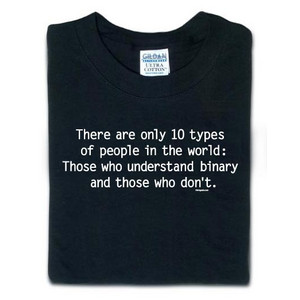 Congratulations! You're now the former!

You should now have a basic understanding of binary, and you can test yourself by converting the following numbers to binary:

You may notice that the highest 8-bit number that can be reached with the binary numeral system is 255. That means that there are 256 possible values that can be in an 8-bit file. Larger bit types allow for many more possible values, and are more practical for modern computing. The computer that you are using right now is probably running a 32-bit or 64-bit operating system. The origin of the term “bit” should make this more clear: bit = binary digits.

Now that you know how to convert base 10 numbers (decimal system) to base 2 (binary), converting base 2 to base 10 should be a snap. All you have to do is imagine the powers of 2 that each binary digit represents and add up all the ones that are represented by 1’s. Test yourself:

Wow! You got it! Awesome!

As you can see, understanding binary isn’t that difficult. Now you can go amaze your friends with your undoubtable geekiness!